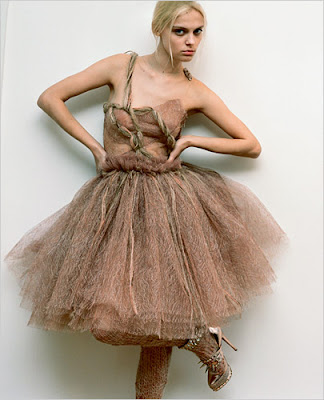 Ah, another Sunday, another issue of The New York Times Magazine, and once again a profile of the designers Laura and Kate Mulleavy--and the paper dolls they once created to introduce themselves to the fashion world. I found the article about these sisters fascinating; here are some excerpts:

Rodarte (pronounced ro-DAR-tay) is a small, extraordinary gem of an enterprise. In 2005, to introduce themselves to the fashion world, the Mulleavy sisters sent out 30 handmade paper dolls, each with a paper armoire containing seven paper dresses. “I was inspired by Zelda Fitzgerald’s paper dolls,” explains Kate, who, like Fitzgerald, drew extensively accessorized wardrobes. The collection itself consisted of 10 meticulously hand-finished garments, including a pumpkin-colored silk cocktail dress with a lovely slouching silhouette and a black wool coat, cut in military style and ingeniously detailed with pheasant feathers and organza inserts. Pieces like these are as skillfully constructed as haute couture (a single gown can require 100 hours of work) but much of it is presented as ready to wear. That first season, their clothes were modestly priced from $2,000 to $3,000. Less than a year later, a whispery yellow silk chiffon evening dress — a pale undulating cascade of tiny pleats and voluptuous, handcrafted rosettes, from the fall/winter collection — was reported to have sold for nearly $20,000. It is now in the permanent collection of the Metropolitan Museum’s Costume Institute.

The phenomenon of fashion-designing sisters is not new, but it’s extremely rare. During the early 20th century in Paris, the Callot Soeurs were known for their elaborate, diaphanous gowns — weightless dreams of dresses with gauzy layers shot through with metallic threads and faceted crystals that played with the light. Now, in the early 21st century in Los Angeles, it is the Mulleavy sisters who are spinning light, movement and color into astonishing clothes. In a recent fashion spread, the model Coco Rocha is photographed wearing Rodarte; she appears as a jubilant pink fairy, her dress a tattered rainbow shadowed with soft tufts of mohair fog.
...The sisters have frequently been asked to describe this California childhood. Their answer is a list, a direct evocation of place that reads like a modernist poem: tide pools, redwood forests, monarch butterflies, mustard fields, wild blackberries, beekeepers and “The Rainbow Goblins,” an extravagantly illustrated 1970s fairy tale about seven imps who prowl the countryside and devour the colors of the rainbow.

...To the outside world, it might seem that Rodarte is in fact a fashion fairy tale, a story about paper dolls who wake up one day as supermodels on the cover of Vogue.

How divine. What I wouldn't give to see those paper dolls and their armoire! Here's hoping someone out there has a set to share with us.

I am a big fan of the fashion journalism of the NY Times; you can read the whole article, as well as notes from Fashion Week in NYC, here:
http://www.nytimes.com/pages/fashion/shows/index.html

Here are the Zelda Fitzgerald paper dolls that inspired Rodarte, captured long ago on the internet: 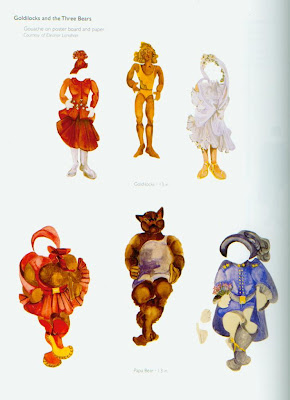