Garth Lax has provided us with 15 photos of the Samy Odin exhibit. Here are the first five, along with Garth's notes on each one: 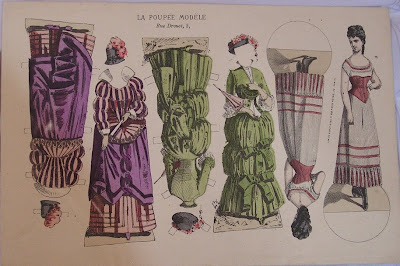 "The first one has a double-sided doll with dresses and hats.
The costumes, in royal purple and medium green, are particularly elegant. The round or curved folding base is a style used often by La Poupee Modele." 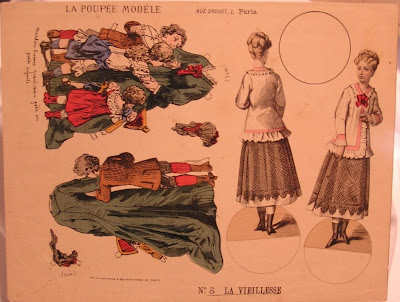 "The second one is entitled 'No. 5 La Vieillesse' (The Elderly One), and has a doll plus a double-sided costume with children. The subtitle is 'Madeleine Desenne, grandmother spoiling her grandchildren.' " 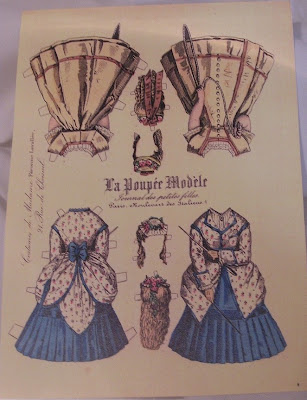 "The third one, entitled 'Costumes de Madame,' shows dresses and headpieces only. Because of the tabs, it must fit a doll that appeared in an earlier issue of La Poupee Modele." 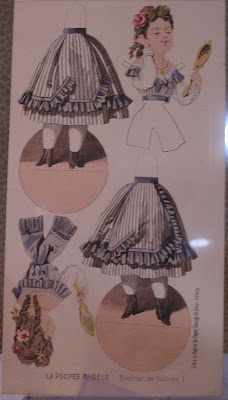 "The fourth one is titled, 'Boulevart des Italiens.' It has a somewhat unusual construction of the doll and costume." 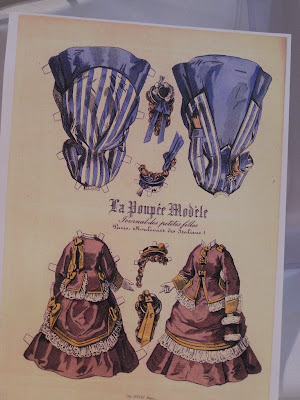 "The fifth one has double-sided dresses and hats only. Again, because of the tabs, the corresponding doll must have been in an earlier issue. While I did a poor job of framing the photograph, just look at the depth of color in those costumes!"

Thank you Garth, for providing us with this excellent record of Samy's fine collection.
Posted by Linda at 10:42 PM