Here's more from Garth Lax on the exceptional Samy Odin exhibit. Garth has done some research on these fascinating historical figures: 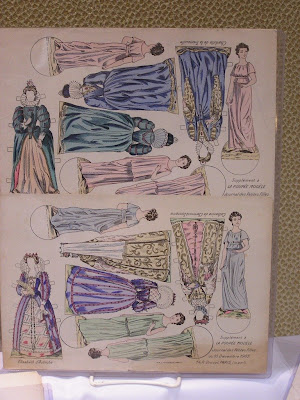 "The upper sheet depicts Charlotte de la Tremouille and one other doll that I can't identify. Each doll has a double-sided costume. Charlotte, 1599-1664, was the Countess of Derby, and was famous for her defense of Lathom House against Parliamentary forces during the English Civil War in 1644.

"The lower sheet, published December 15, 1903, shows Elisabeth d'Autriche (Elizabeth of Austria) and Catherine de Clermont-Tonnerre, with a costume for each. Elisabeth d'Autriche. 1554-1592, was the daughter of Holy Roman Emperor Maximilian II and Maria of Spain, and became the Queen of France upon her marriage to Charles IX. Catherine de Clermont-Tonnerre, 1543-1603, was a French noblewoman, lady-in-waiting to Queen Catherine de Medicis, and later became the Countess and Dutchess of Retz. During her husband's absence, when brigands invaded his lands, she assembled troops, led them herself, and drove the robbers out." 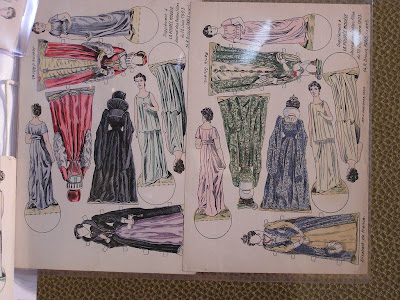 "The left sheet shows two dolls -- Jeanne d'Albret, and one that I can't identify. Jeanne d'Albret, 1528-1572, was the Queen Regent of Navarre and the Mother of Henry IV of France. She is regarded as the leader of the Huguenot movement. This sheet appeared in the June 15 1903 issue of La Poupee Modele.
The right sheet, from the December 15, 1903 issue of La Poupee Modele, shows Mary Stuart and Elisabeth of France,with a costume for each. Mary Stuart, of course, is Mary, Queen of Scots. While she was executed by Elizabeth I of England, upon Elizabeth's death, Mary's son, James VI of Scotland, became James I of England. Elisabeth of France, 1602-1644, was the daughter of Henry IV and Jeanne d'Albret. She married the future Philip IV of Spain. One of her daughters became the first wife of Louis XIV of France." 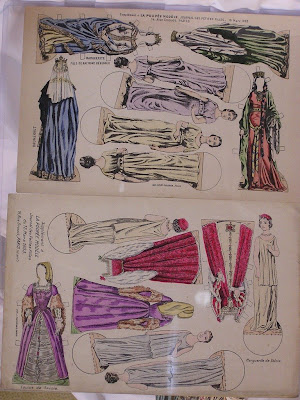 "The upper sheet shows two dolls with costumes for each. It appeared in the March 15, 1902 La Poupee Modele. One doll is Marguerite, the daughter of Raymond Berenger. Also known as Marguerite of Provence, 1221-1295, she was the Queen Consort to Louis IX of France. She accompanied him on his first Crusade, and when he was captured and held for ransom, she took command of the negotiations and thus became the first woman to lead a Crusade.

"The second doll confuses me. It may depict Brunehaut, a Frankish Queen who was late 6th/early 7th Century,but I'm unsure about the dating of the costume. A good mystery for solution by you who know a heck of a lot more about costume periods than I do.

"The lower sheet appeared in the March 15 1903 issue. It depicts Marguerite de Valois and Louise de Savoie, with a costume for each. Marguerite de Valois , 1553-1615, was the daughter of Henry II and Catherine de Medici of France, and the grand daughter of Jeanne D'Albret whom we saw in a previous sheet. She married Henry of Navarre (later Henry IV of France) and was caught up in all the religious controversy in France in the late 16th Century.

"Louise de Savoie, 1476-1531, was the Mother of Francis I of France, and the Regent of France while Francis was off, fighting the Italian wars." 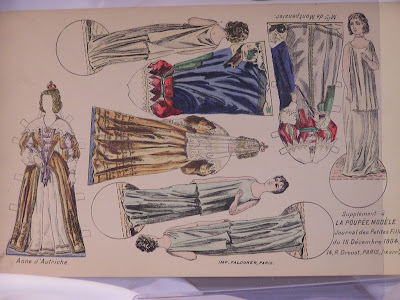 On any of the photos, place
your cursor on it, and
left click the mouse.

You'll get a great detailed view.