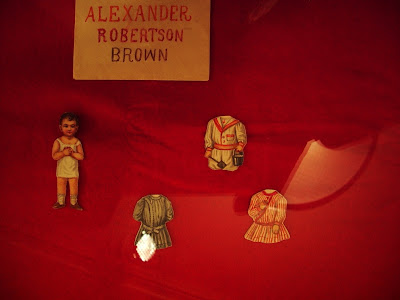 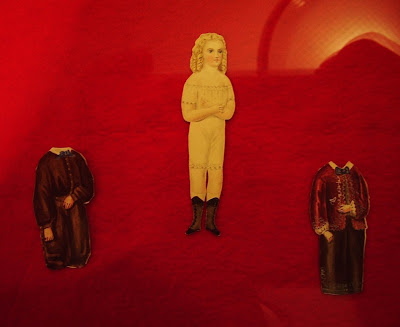 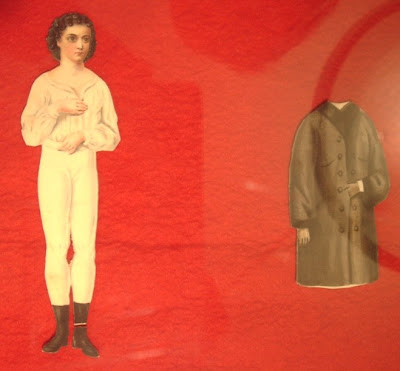 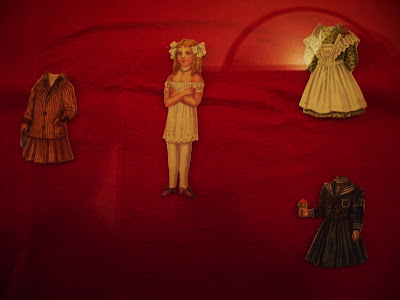 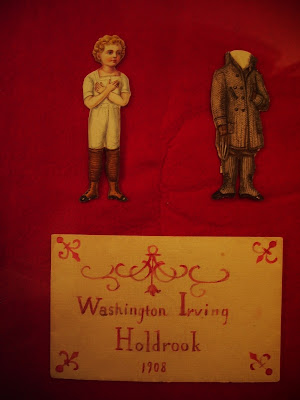 Thanks to Kwei-lin Lum for allowing me to post her photos here. As you can see from the pictures, these paper dolls were in glass display cases, and glare was hard to eliminate. I'm grateful to have a record of these beautiful paper dolls, and would welcome more.

Anna Lindner was born in Germany in 1845, and was stricken with polio as an infant before her parents came to the U.S. She began painting at the age of 18, in 1863.

By 1869, although lacking formal artistic training, she developed watercolor and pen & ink skills worthy enough to be exhibited at the National Academy. She exhibited inherent flair for color and talent for exquisite detailing. Over the remainder of the century and into the next, she turned out hundreds of watercolors of commonplace scenes in and around her family home. Although she favored watercolors, Anna was also accomplished in the use of oils. She lived with her brother, his wife and their daughter Emilie in Bayonne and later (1908) in Bloomfield, both in N.J. Her brother installed an elevator that allowed her to move between floors. The house had a wraparound porch, where she would paint.

Anna Lindner died in 1922 at the age of 77. Her niece, Emilie, took very good care of her aunt's art work, and eventually donated all of it to the NJ Historical Society.

The bulk of Anna's works are paper dolls--out of a collection numbering 615 items, 450 are paper dolls, their outfits and animal friends, made for Emilie when she was a child. The paper dolls are ordered into families, with some having as many as nine members. All dolls have first and family names.

From a 1974 appraisal: On par at least with scarce Chandler dolls, superior to McLoughlins and later Tucks, and infinitely superior to magazine published dolls such as found in Godey's, Leslie's, etc., these dolls are of portrait character and of quality of fine miniatures on ivory. The dolls are complete, front & back. Extensive wardrobes, likewise, usually with backs, created in such detail and so expertly rendered that they leave no doubt to fabric represented.