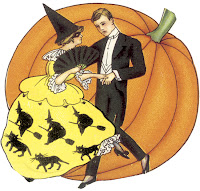 Have a safe and fun Halloween. This vintage image is from the extensive clip-art collection at Dover Publications.
Posted by Linda at 12:43 PM No comments:

Kwei-lin's Day of the Dead 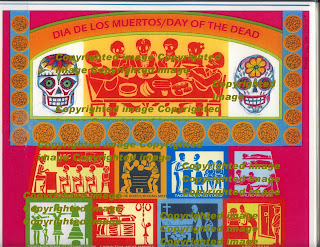 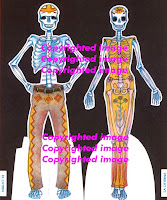 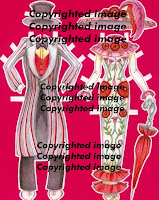 Kwei-lin Lum created a paper toy based on the Mexican Day of the Dead. It is a colorful altar with paper doll figures, her vision of the holiday celebrated on Nov. 1 and 2 in which the dead are welcomed back to the world of the living. You won't find this set on her Web site, but Kwei-lin said she is willing to take orders for those who are interested.
UPDATE: I've added a better picture of the sugar skulls on the cover.
Posted by Linda at 12:00 AM No comments:

Selling at the Convention 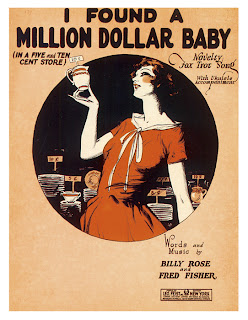 Some vendors enjoy opening their rooms for selling before the official salesroom opens--it's a chance to greet friends they see only once a year, and buyers get a chance to scope out what's for sale, and pick up an "early-bird" special.

One problem: Sometimes the rooms are scattered all over the hotel. Not many people get a chance to hit all of them. Some convention-goers find out about the open rooms too late.

Here's a solution that Embassy Suites has suggested: a block of rooms in the second floor south wing of the hotel designated for vendors. These rooms have shopfront windows, and some have connecting rooms. Room selling isn't for everyone, of course. Some prefer to wait for the salesroom to open. But if you do like to sell from your room, be sure to reserve in the second floor south wing.
Posted by Linda at 1:02 PM No comments: 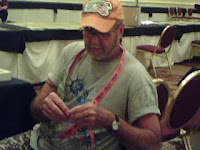 David Wolfe got busy in San Antonio, purchasing raffle tickets at the convention. He and many others know that raffles help offset the cost of the convention. (In the Midwest, they call them "helpers" for a reason.) We need your donations for the raffle table to make sure raffle tickets sell like hotcakes!
In fact, in this lull before the holiday season kicks in (and it seems to start right before Halloween these days) right don't you review your collection for duplicates, or items that no longer fit in with your collection theme. We love donations of anything paper doll related. And note to paper doll artists: We especially love original signed art work!
Posted by Linda at 9:32 AM No comments:

Thanks to our friends at Embassy Suites for setting up this easy way
to book your room for next year's convention in Parsippany, NJ.

This link will also appear on the upper right of this page.
Posted by Linda at 12:39 PM No comments: 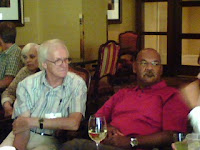 Part of the fun of convention is being able to wander into the hotel bar and restaurant and sit down for a chat with your favorite paper doll artists. Collectors and artists hold court late into the night, catching up with each other, and discussing latest projects and purchases.
Posted by Linda at 2:04 AM No comments: 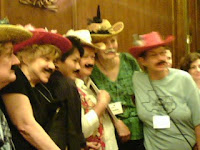 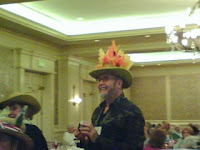 It really was ingenious of Joyce McClelland to have people decorate cowboy hats--and she provided mustaches, too! The group photo shows from left: Pat Motley, Carol Sullivan, Ron Fong, Marion Creamer, Deanna Williams and Sandee Fillerup. Hope I got all the names right--let me know if I didn't! The solo shows David Wolfe and his whimsically decorated hat.
Posted by Linda at 10:19 AM No comments: 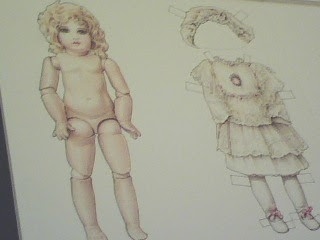 The artist Elaine Shants attended the San Antonio convention, after taking a hiatus from the paper doll making world. For those of us who collect her Famous Paper Doll Women series from the 1980s, it was wonderful to meet her and to know she's returning to the drawing board, so to speak.
Posted by Linda at 8:59 PM No comments: 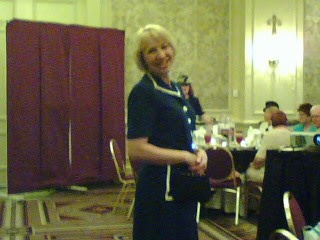 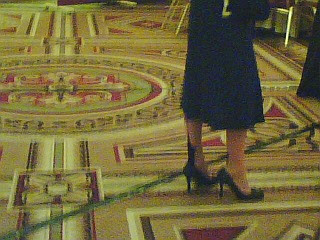 In San Antonio, Jenny Taliadoros, editor and publisher of Paper Doll Review and Paper Doll Studio, had on a fabulous vintage dress, and completed her look with seamed stockings and high heels. 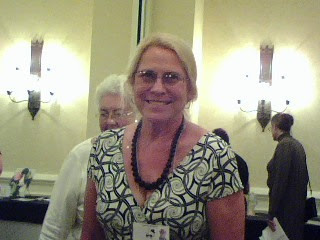 More San Antonio photos. Lone Nunnally has a wonderful Web site called Origami Bears. It was fun to see her and others who chat on the Yahoo paperdollnews group.
Posted by Linda at 8:21 PM No comments: 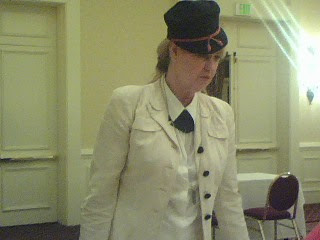 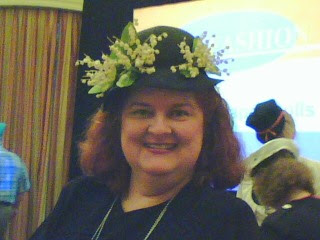 From the top: Beverly Micucci and Brenda Sneathen Mattox. We were encouraged to dress in a 1940s-style salute to the military.
Posted by Linda at 3:57 PM No comments: 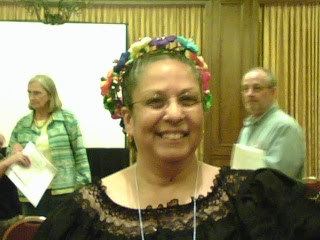 Grace Keene and her mother in law Katherine did a terrific job organizing the raffles area at the San Antonio convention.
UPDATE: In the background, I believe that is Jim Faraone to the right, and Helen Page's daughter, Margaret Allen, to the left.
Posted by Linda at 3:00 AM No comments: 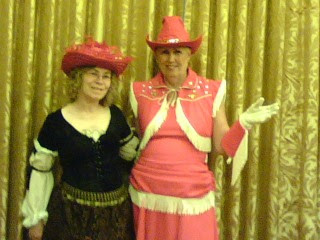 Mary Bolster and Jan McKay. Dress up is part of the fun of every convention.
Posted by Linda at 2:53 AM No comments: 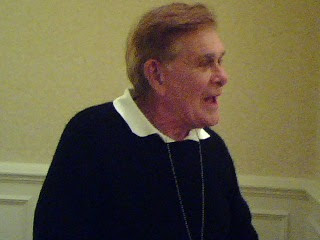 Tom Tierney at San Antonio. Tom's stories about his New York days are legendary. We look forward to seeing him at every convention.
One of the best articles about Tom can be found in the fall 2001 issue of Tin House, a literary magazine. In a wonderful bit of whimsy, an article about the actor Bill Murray in the same issue is illustrated by a Tom Tierney paper doll of the actor.
Posted by Linda at 2:34 AM No comments: